Man Steals His Newborn From Hospital

Oh, my word, this story was unbelievable when I saw it yesterday.

This man literally stole his own baby from the hospital in a shopping bag like you get from Abercrombie and Fitch.  He was able to slip out of an emergency exit undetected although the baby had on the leg bracelet to “prevent” her from getting out.

He took his baby because he was fearful the social services people would take the child from him and his wife or whatever because drugs were in her system.

She not only had drugs in her system, she had meth, weed, and the ultimate…morphine, in her system.  The hospital had already called social services so the man thought he could get away with her before they got up there.  He wrapped her in blankets and put her in this bag. 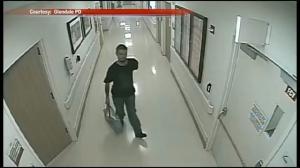 You know, for 9 months, you can think about someone other than yourself when you’re pregnant.  My thing is, it’s a freakin miracle that the baby is alive.  Secondly, they both should go to jail and rehab afterwards in order to even be in the presence of this baby again in the future.

It makes no sense.  They know that the authorities drug test babies and this was going to come up.  They actually had the baby at home and then took her to the hospital to get checked out I guess but this baby has been through hell and back.

Check out the full story at the link below.

Pic and article from myfoxphilly.com.

Posted by hothoneyedcocoa on March 13, 2015 in Uncategorized