RSS
← Morning Inspiration
What is Love? →

Paul R. Williams, in full Paul Revere Williams   (born February 18, 1894, Los Angeles, California, U.S.—died January 23, 1980, Los Angeles), American architect noted for his mastery of a variety of styles and building types and for his influence on the architectural landscape of southern California. In more than 3,000 buildings over the course of five decades, mostly in and around Los Angeles, he introduced a sense of casual elegance that came to define the region’s architecture. His work became so popular with Hollywood royalty that he was known as the “architect to the stars.”

Williams, the second of two children, was born shortly after his parents moved to Los Angeles from Memphis, Tennessee. Both his parents died by the time he was four years old, and Williams was reared by a family friend; his brother lived with a different family. Because his foster mother quickly recognized his talent, Williams received a solid education and followed his dream to become an architect, though there were few African American architects at the time.

His architectural aspirations remained uppermost in his thoughts. He attended the Los Angeles atelier of the Beaux-Arts Institute of Design (1913–16) and was certified as an architect in 1915. While attending (1916–19) a program for architectural engineering at the University of Southern California, he took a series of low-paying jobs at several architectural firms to learn as much as he could. He learned about landscape architecture while working with Wilbur D. Cook and got his first taste of designing on a palatial scale at the firm of Reginald D. Johnson. From 1920 to 1922 he worked for John C. Austin (with whom he later collaborated), turning his attention to designs for large public buildings.

In 1921 Williams received a license to practice architecture in California and accepted his first commission—from a white former high-school classmate, Louis Cass. A year later, at age 28, Williams founded his own business, Paul R. Williams and Associates, and in 1923 he became the first African American member of the American Institute of Architects. He later was licensed to practice in Washington, D.C. (1936), New York (1948), Tennessee (1960), and Nevada (1964). His designs for suburban and country estates incorporated Mediterranean, Spanish Revival, and English Tudor themes, a blend of styles that strongly appealed to California residents at mid-century. No matter what their stylistic elements, his houses were impeccably designed down to the smallest detail, and they were airy, sun-filled, and graceful.

As Williams’s reputation grew, he received commissions to design houses for such Hollywood stars as Lon Chaney, Lucille Ball, Frank Sinatra, Bill (“Bojangles”) Robinson, Barbara Stanwyck, Cary Grant, Humphrey Bogart and Lauren Bacall, and Anthony Quinn. Among his many remarkable buildings are the opulent Saks Fifth Avenue building in Beverly Hills and the flying saucer–shaped Theme Building at the Los Angeles International Airport (as codesigner). He also oversaw additions to the Beverly Hills Hotel in the 1950s. In addition to stores, public housing, hotels, and restaurants, he designed showrooms, churches, and schools. 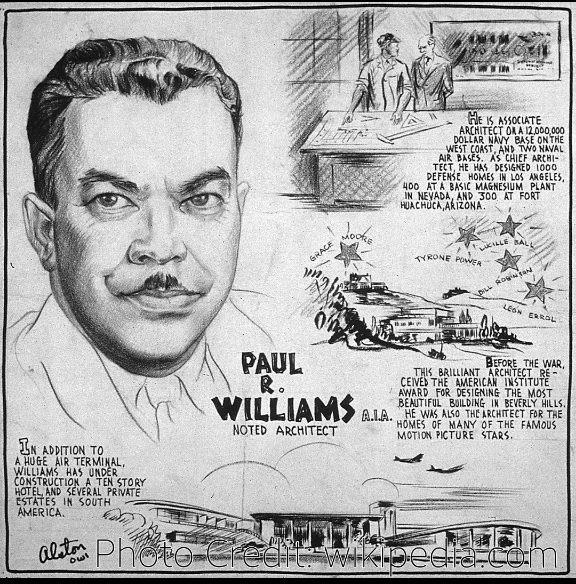 After 1950, when Modernism and its most-predominant architectural manifestation, the International Style, began to hold sway, Williams was seen as an architect of traditional (that is, old-fashioned) designs. His gift for accommodating eclectic tastes while obeying sound design principles was seen as a drawback. But public taste eventually came full circle, and Williams-designed homes, especially, were again in demand in the early 21st century.

Williams wrote a number of articles, notably “I Am a Negro” (1937) for The American Magazine, and two books, The Small Home of Tomorrow (1945) and New Homes for Today (1946). In 1953 he was awarded the National Association for the Advancement of Colored People’s Spingarn Medal. Many awards and honours followed, both during and after his lifetime.

Posted by hothoneyedcocoa on February 20, 2015 in Inspirational Sips

← Morning Inspiration
What is Love? →