I published a post on Catelynn and Tyler regarding their new baby Novalee.

They have an open adoption agreement (with their first baby Carly) so Catelynn and Tyler get a chance to see Carly every so often.

According to the latest news, Catelynn and Tyler are not supposed to show pic of Carly online.  Just recently they showed this one… 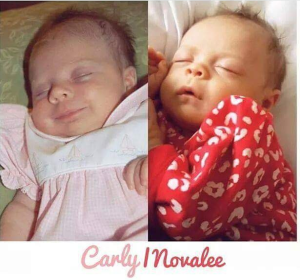 Carly is a 5 year-old now and the adoptive parents are upset about this picture?  You cannot see this pic and go out and find the 5 year-old child attached to it.

I mean, if you are going to film for MTV and use the actual footage, what’s the problem?  Do they know how many people watch MTV????

I really, really, really wonder if at this point, if Cate and Tyler will challenge their adoption and get Carly back.  They are in a much better place in their lives and I believe that at this point, Carly is only five, she will be easier to accept that type of transition back to her parents than them just visiting her until she becomes 18.

I always wondered how adopted children feel when they get older and find out that their biological parents gave them up for adoption but then had other kids later.  It’s like a double-edged sword because we want stability for the baby, number one but we also see the results of a secret of this nature being kept for those children who want to know.  We also see the other side, when kids are told later in life or whenever and they are just fine but they still want to know their biological family because it’s who they are.  I, for one, would not want to leave an entire 2 sides of my family in the rear view mirror.  If I found out I was adopted, I’d have to find out about everyone that’s a part of me whether it’s good or bad.  You need to know in my opinion.

Posted by hothoneyedcocoa on March 24, 2015 in TV and Movie Sips