Ugh. I am so upset. I really wanted to not like this show.  From the very beginning, I thought this was a sequel to Hustle & Flow and that it would not hold my attention long. Well, they messed me up with the 1st 5 minutes of the pilot episode with that woman singing that soulful song and then with Cookie beating her youngest son with that broomstick.  Pretty funny stuff because I’ve known women to do that very thing to their unruly sons. During the pilot they introduced a bunch of characters, killed one, and threw in some great music, so I decided to give it another shot the following week. Plus, I found out that Timbaland was working on the music so I knew there would be some great tunes ahead. Since then, I have tuned in each week to this musical drama. It just sucks you in and Taraji P. Henson is playing her best role yet. You believe her character completely.

The episodes following the pilot showed us how the patriarch Lucious Lyons has been afflicted by an incurable disease, hates his gay son, wants his youngest son to be just like him, is a murderer, doesn’t really care about the eldest son who has his back at all cost, is dating a debutante, and has a chemistry with his ex-wife that is undeniable. You learn to dislike Lucious for his harshness and insensitivity to his son’s sexual orientation. Then, he murders the man who practically raised his boys while his wife was serving a prison sentence for his drug activity. On a side note, during the first episode Lucious had several different hair pieces going on. One moment it was wavy, then he had a box, and then a TWA. Too funny to me to see that lack of consistency. LOL. Anyway, he does have one redeeming moment when he fires a rapper who consistently disrespects his ex-wife. Then, all of that goes out the window when the youngest and middle son collaborate on a music project and he gives all the credit to the youngest one. He has several moments like that.

There are 3 sons at the middle of this family. The eldest son Andre is a business savvy, conniving, scheming, bipolar, power-hungry young man who seeks his father’s approval. We see flashbacks where he hid a gun in his legos just to prevent his dad from being arrested and then in the present time he provides an alibi for his father during a murder. Andre wants to run Empire as he spearheads the IPO sale of the company and is willing to crush his brothers in the process to do so. Jamal is the bane of his father’s existence. He’s gay and has a latin lover. His father constantly reminds him that being gay is his choice and he owns him. Even though Cookie has been gone for 17 years, there are flashbacks that reveal even as a young child she knew he was different and would have his back. Because of this bond, she is able to convince Jamal to pursue his music further. He eventually denounces his father’s riches and seeks after his own fortune making dope music with his mom as his manager. He is now in a race to be bigger than his youngest brother because he is definitely the most musically talented. He will be the one to watch for the most transformation.  Hakeem is the youngest of the boys and the most spoiled. His father dotes on him, tries to prime him to run the company and pushes him to be the best. He definitely has some mommy issues because he’s dating a woman old enough to be his mom and he calls her mama. Say what? He hates Cookie and doesn’t respect her. He has to somewhat get along with her because his younger girlfriend is being manage by his mom. Hakeem has talent, but has the big head. As it’s been said, pride cometh before the fall.

Cookie is the matriarch of this family. She is a bad mamma jamma. She walked out of prison with an agenda, The first place she goes is to see her middle son, Jamal. He welcomes her in. After getting her 21st century makeover she heads to see Lucious at Empire. She wants to make it known that she helped build the company with her $400k. There are several flashbacks that reveal how she was down for her dude and believed in his craft wholeheartedly. She feels betrayed and she wants to get even by showing Lucious that the son he rejected all these years is the artist he once was. She has hilarious run-ins with his new lady, who is so super annoying and arrogant. Anyway, Cookie has a lot of levels to her and we find out some of these levels as she meets with federal agents on a case, helps to increase the confidence of Jamal, orders a hit in error, and genuinely wants a relationship with all 3 of her sons.

I have to admit, it’s getting really good y’all. Jamal is now believing in himself and declared war on his brother with a punch to the gut. Hakeem is hotheaded and irrational especially when he finds out his girl is a lesbian. Andre is behind a lot of the confusion and I believe his bipolar disorder is manifesting into another condition which will cause him to eventually become completely unraveled. It’s messy, full of great supporting cast members, and the music will have you grooving in your seat. It looks like I’m in it for the long run. Who’s with me? 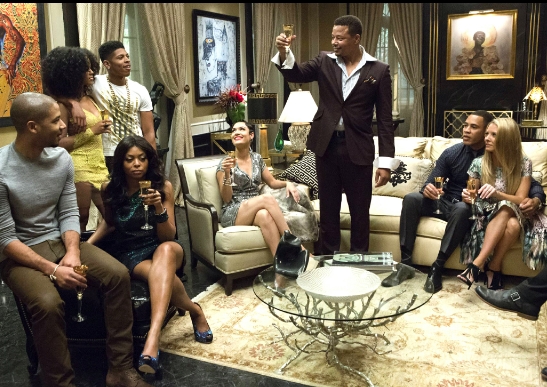 Tune in to Fox on Wednesdays at 9pm.Empire

What do you think about Empire? Who is your favorite character?

Posted by hothoneyedcocoa on February 5, 2015 in TV and Movie Sips

2 responses to “EMPIRE…I Hate You!”